I'm going to do a write-up about the entire NYCC trip, but I want to edit my photos first. For now, here's the image of all the parts and masks I ended up with after NYCC. But first, a little explanatory background:

Several months ago, I got an email from a woman on the LEGO CEE team, asking if I wanted to be part of a project she couldn't tell me about. I, of course, said "uh, only absolutely." She sent me an NDA, and I signed it. The next email started out with: "So we're bringing BIONICLE back in 2015."

This was before Brickfair, and I learned in that email that Black Six had known for another six months before that. Later that day I'd get an email saying that Tufi Piyufi was also under NDA now, and the three of us have been a core team working on the NYCC promotion and trying to get fans to NYCC without letting on that we knew about the BIONICLE thing, until, of course, TLG got tired of the leaks and just said "yep, it's coming back, go to NYCC". (That part made it a lot easier, lol)

Eventually we were told TLG wanted to send out a bunch of preview parts to a handful of MOCers (as well as Andrew and Jen), so we came up with a list of ten MOC builders around the world (which included me, so nine others) to have parts sent to. This, unfortunately, was then narrowed down by TLG to two slots outside of me, so parts were sent to the three of us, and then to Kakaru and Retinence. Oh! And Roa was sent parts separately as well. When the parts went out, the CEE team member told me that she was sending us less than she had planned, because not all of them had passed through legal yet.

Fast-forward a month or two to Brickcon, and I was talking to her there. She told me the rest had passed through legal, and she would have them for me, specifically, at NYCC. At NYCC she handed me a big bag of parts, with the direction to share them with Andrew, Jen, and Micah. In this bag was that giant bag of clear Tahu masks.

We decided the fair thing to do was to part them out in a manner we deemed most fair in the hotel room with the people who attended the con with us. This included the clear Tahu masks, as from what we were told they were supposed to be part of the original shipments out to the group of us under NDA, at leas the three core members of the team. Before we parted the Tahu masks out, though, we saved several dozen for BZP giveaways, with the acknowledgment that we didn't all need a ton of them, and several of us would probably be willing to give more to the cause at some point if we feel like doing so.

So the bag photo was a bit of a troll, I'll admit. Not all of those are for BZP giveaways, some of us probably ended up with more of the masks than BZP itself did. But like I said, it's not like we all need those extra masks, and I can guarantee some of mine and Nukaya's are going to filter out a small amount at things like BricksCascade.

Anyway, that all said, we're almost to the photo! Some of this is from the VIP building event at the LEGO store, but most of it is from that big bag of parts.

And again, massive thanks to LEGO and the CEE team for all they've done for BZPower, the general community, and yes, for me personally. These people have invested massively in us as a fanbase, and especially in BZPower. Words don't really express how amazing these folks are, and how much hard work went in to planning these things. We were only involved in what was most likely a small fraction of the real planning, but I can tell you it was a lot of planning. These people are amazing, and they really really love us. 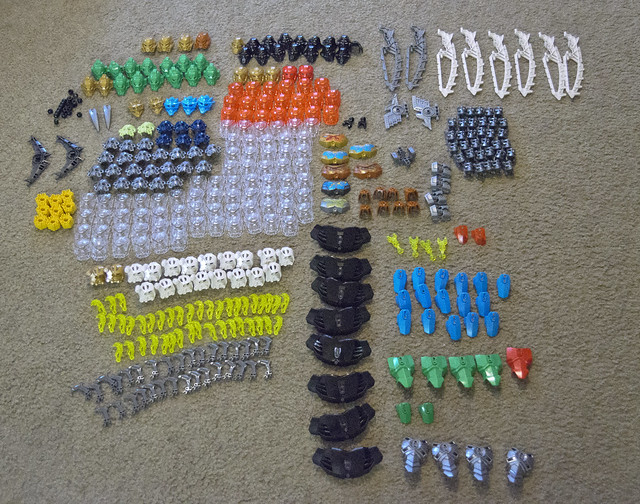