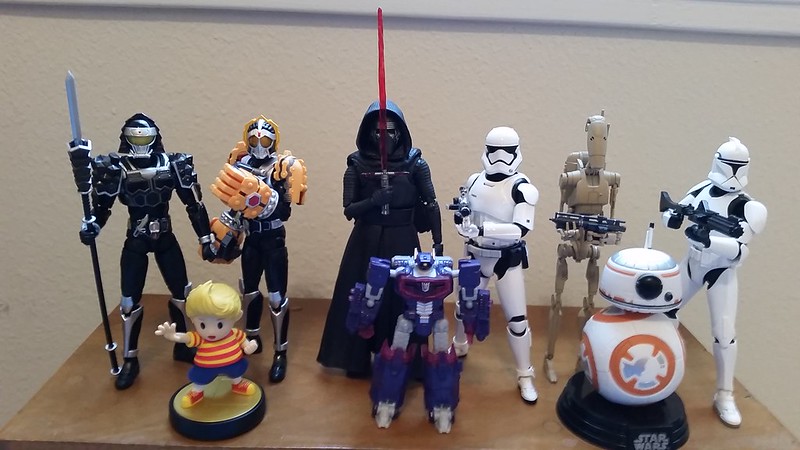 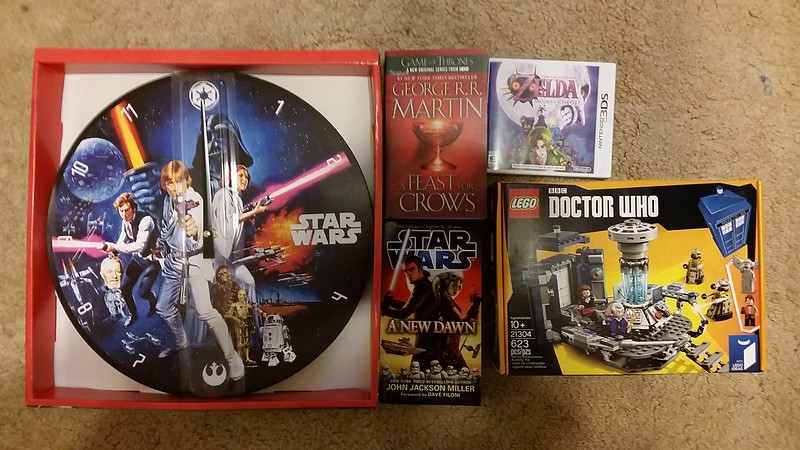 (BB-8 through the clock are from Christmas.)

Figuarts dominated my purchases this month, with Star Wars being very prominent throughout everything really. But let's talk Kamen Rider first. With Knuckle and Kurokage in my hands, I finally have all Gaim Riders!! Yes! There's still Lord Baron to look forward to, but otherwise I'm done and I freaking love looking at them all together.

The Star Wars Figuarts are a mixed bag of mostly good. The one I don't like is the Clone Trooper. While it looks great, it suffers immensely in the articulation department. Hips are as rubbish as the Stormtrooper's (I'm serious when I say they may be the worst I've had from a Figuart) and I just can't seem to get him to hold his gun closer to his body. Thankfully the First Order Stormtrooper absolutely blows them out of the water. The hips in particular are great; they're a brand new design for the entire line and I think are only the second Figuart to use something like it. I haven't had as much time to mess with it, but it's great. Kylo Ren I also only picked up yesterday, but so far I'm liking him. Not much to say there other than he's cool. The real standout - which is odd even to me - is the Battle Droid. Wow. This Battle Droid... is perfect. Anything I want to do, it can, and looks great doing so.

Lucas I ordered from AmiAmi to be sent with my December order as a very last minute thing before it shipped since he randomly came back in stock. At least now I don't have to worry about him next month and can take an Amiibo break for a while until the next two come out. I think I like him more than Ness's Amiibo to be honest. Shockwave was the first Transformer I picked up in a long while and I love the little guy. Just such a good figure. Finally, I really need to find a place to display my Pop! vinyls now with BB-8 joining the party. That was an early Christmas gift from my fiancée and I simply adore it. Plus he's a bobblehead, which is super fun.

Got some new forms of media entertainment for the first time in a while. Was holding off on a few purchases explicitly for the holidays, so I'll probably be getting the rest of those soon now. Anyways, got another A Song of Ice and Fire book that I'll get to eventually. Good news is I'm almost done with other book so I can start reading the one before it soon haha. Also have my second new canon Star Wars book, which I only realized as I started to write this that it's the same size as all of the others........ When Tarkin wasn't and I swear copies of A New Dawn I saw in the bookstore before were the same as it..... So much for that excitement I had over the easily noticeable split between Legends and canon on my shelves haha. Oh, and I got Majora's Mask like I figured. I've only played it a little but wow I can see this one taking me a good long while.

I didn't make a dedicated Christmas haul post this year since I really just didn't feel like it. But the miscellaneous things remaining in my list come from there. The clock I included because it's cool; it came from my sister, as well as the silverware I mentioned elsewhere that she'd be getting me. Sorry, no pictures of that.

I also didn't think to take pictures of the Doctor Who Monopoly or t-shirt, and they're still in the process of being shipped to Texas right now. But they, and the Ideas Doctor Who set (also in the mail so haven't built it yet but ohhh how I want to!), came from my fiancée's side of the family. There was definitely a noticeable theme there haha.

So yeah. That's this month and thus 2015 over. I plan to do a collection update once my Christmas packages arrive so I can include those things. A lot has changed since just May.