So I'm still too lazy to do proper front page reviews with custom pictures, write-ups, and massively edited video... and also we've stopped doing Youtube Livestreams.  But I still have a backlog of sets I want to build (and talk about) so I'll be posting a few more brief blog reviews with images via Instagram!  (Since Flickr has it's whole image count thing).  So without further ado...

Ninjago's 70678 Castle of the Forsaken Emperor 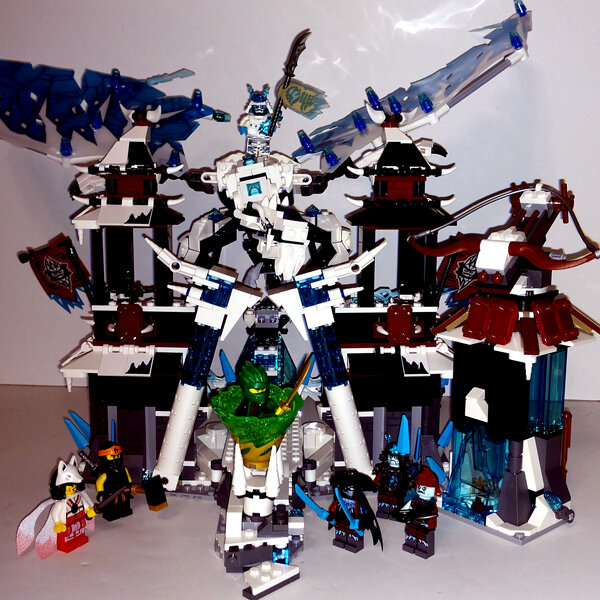 Gotta be honest, I picked this up for the cool minifigures and then for the pieces, but the build itself is actually pretty neat too.  It's $99.99 for 1218 pieces, so a bit pricy but still a decent value.  It comes with 7 figs, a dragon, a guard tower, and a "castle".

The figs are good.  The Ice Emperor has some neat printing on him and enough hints to verify that it is actually evil Zane.  (Haven't quite caught up on the show, don't know how he turned out this way but just know that he did.)  The other Blizzard minions are okay but again fairly generic; azure katanas for the win though.  Cole is a nice grab, and this is the version of Lloyd with the could energy helmet which was a huge want for me.  But the fox-like Akita steals the show for the figs here; good printing but also an excellent helmet.

The guard tower is so-so; it has a little mini prison on the bottom, but the cooler design is the functional crossbow at the top.  (I mean, it doesn't function like a crossbow but it looks really close and the spring loaded launchers handle the action feature well enough.)  The main castle involves an icy throne with two towers rising up to the sides.  The ice detailing on the throne is cool and I like the use of the printed flags as roof elements.  But the coolest part is the action feature.  Place the ninja in the ice spikes and push the lever; the two towers split out to reveal the throne, which has ice blasts shoot up behind it.  Best of all, the spikes in the front spin, so when you put Lloyd in his tornado it looks like his Spinjitzu causes the towers to slide away as he approaches the emperor.  I think this is the cleverest incorporation of Spinjutzu into a Ninjago set ever.  Very fun.

Of course, the true highlight of the set is the dragon.  To be fair, there have been a few other brick built Ninjago dragons who have used a similar design with the wings before (NRG Green Dragon pops to mind) but this is the first one I've picked up like this and I'm totally impressed with it.  In addition to decent posability, the icy color scheme totally works.  Only real downside is that the head is a bit small and doesn't stand out compared to some of the other dragons we've seen out of Ninjago.  But it is still up there as a great model and I've already taken it to work to display on my desk.  Woo.

Overall, I think this is a very worthwhile set, capturing a lot of great things from Ninjago and mixing it with the cool icy theme.  It's a little expensive, yes, but if you can handle the price I'd totally recommend this.

Anyway, thanks for reading, planning to go through a couple of other 2019 sets that I've been hording and post some pictures and reviews.