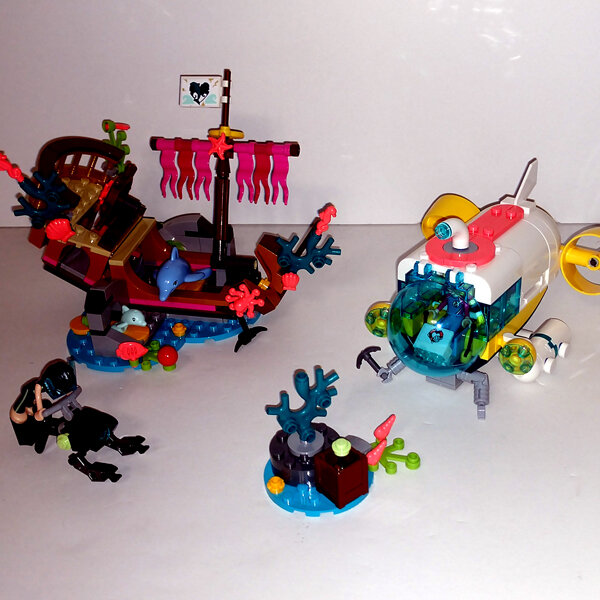 I've honestly not purchased a lot of Friends sets in recent years.  First I started collecting from the theme because of the new pastel colors, but the novelty kinda wore off after a while (and I started focusing on the Elves theme instead) so I haven't picked up any.  But this set had a few fun pieces that I was interested to get.  And besides, I've always been tempted by submarine sets.

The figs are... honestly I don't care, which is kinda unusual for me.  The designs and hair pieces are nice but I have no real need for the minidolls.  (I hear this is a scene directly from the show though, and the other character is actually an antagonist, so that's cool.)  Indeed, the bigger drawl was the wildlife.  The adult dolphin isn't new but I love the mold so I can appreciate another one.  The baby dolphin is a great addition too, and actually has better connection anti-studs, so more versatile.  Plus, the pack of coral-colored sea life is great, with fish, clams, seahorses, starfish, and an octopus; these are super fun and I can't wait to find a way to incorporate them into a MOC.

If we're also looking at new molds, the teal seaweed / coral elements also greatly interests me.  The plethora of pins and attachments is inspiring me to have fun with these somehow.  I am a bit disappointed that they are very much unsymmetrical, but that just adds further challenges to using them in builds.  And the angles are quite fun to experiment with.  You get three pieces in this set, which is a nice start, but I'm thinking I'll need a lot more to really come up with something crazy.  (And I've apparently angered a lot of folks in LUGBulk by making these my part choice.  Hehehe.)

The first big build is the submarine, which is well rounded and compact.  It's not a super intricate build by any standards, but the rounded doors in the back and the bubble window are positioned quite well, and the setup inside to seat the minidoll works quite well.  It's a bit of a junorized built but it works well.  My biggest gripe is that the arms on the front are too short to really be useful.  (I'm sorry, I'm nostalgic for the Aquazone subs and their lanky arms.)  The two mini-builds that you build before the sub, on the other hand, are forgettable.  The landscape piece is very simple (and I guess it has a cloth that reveals a treasure map when it gets wet... I didn't really deal with that element.).  The underwater scooter also positions the propeller right beneath the diver's belly, which seems unsafe.

The best part of the build was the sunken ship wreckage.  It was kinda fun building a mini pirate ship and then covering it with sealife.  The stern of the ship has a neat technique that angles it upward pretty nicely, but the bow's angled attempt is a much weaker connection that is prone to breaking whenever the model gets moved.  There are a few hiding spots for fish and the baby dolphin built around the ship, and the mast has an action feature where it can fall down and pin the dolphin, which necessitates the need for the sub to swing by and help them out.  It's also not a super complex design, but it really does a great job at setting the undersea location.  Very well done.

For $39.99 USD, only 363 seems a little low, but the coral, dolphins, and sea life elements bring up the value.  It's also the second cheapest set for the teal coral and baby dolphin, the cheapest set for the coral colored sea life elements, but it has them all in one set.  Plus, the sub and sunken ship are fun designs and add a lot of play value.  Yeah, it won't win set of the year, but it's a modestly priced set that does a great job at bringing out the Friends underwater adventure.  And it's been a while since a Friends set caught my eye, so I'd say it's worth it.  (Granted, I bought it nearly six months ago but only recently put it together, so I guess I wasn't that hard pressed for the pieces.)