Oh hey I think I'll actually review a set I've picked up from this year... 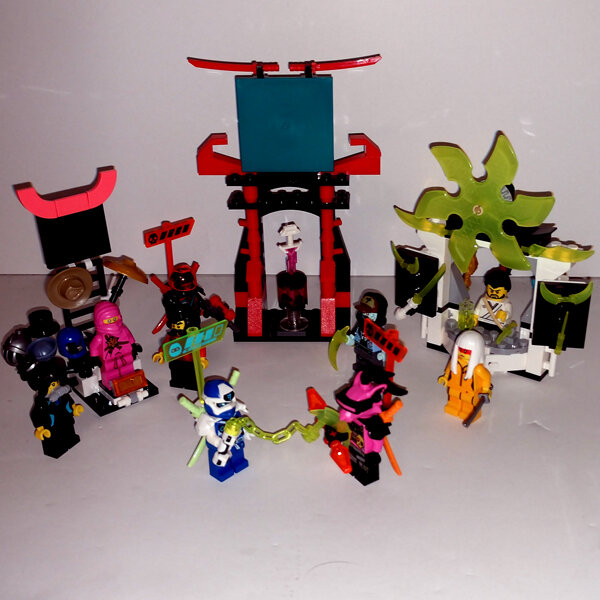 Okay, this is one of Ninjago's more substantial figs packs.  9 figs for $29.99?  Not bad!  Well, okay, the builds are bad, polybag level IMO.  But the weapons and accessories more than make up for it.  We've got katana in gold, silver, azure, pale green, red, and orange all in one set.  And the new gamepad weapon hilts are super fun!  Not to mention that pink sword that does fit loosely into an axle hole.  And more of the Ninjago blades pack in trans green!  This set is great for the figs and accessories, but mostly supplemental when it comes to actual sets.  $30 for 218 pieces is a bit steep, after all, so this is really targeting minifig enthusiasts.  (I'm one, so it still works out for me.)

For the figs... you get four of the Ninjas.  Jay is in his new Digi outfit, very cool looking with the blue and white and cyber face, but he shows up in a bunch of other sets.  Cole and Nva get their generic Avatar forms here, which is cool because they didn't get the arcade pods like Jay, Kai, and Lloyd... of course, their torsos are common City ones so nothing too exciting.  The highlight of this set is Pink Gi Zane; I guess it's supposed to be his avatar, but it's placement in the set makes it look more like a display, so who knows who he's supposed to be character wise.  Still, it's a great callback to a one-shot fig from the early years of the TV show.  (Second year but first season... the numbering of the TV seasons irks me.)

The baddies here are Red Visor and Richie, both who appear in other sets but still come with the trans orange icons and such.  Richie is interesting with his custom head and wields a game controller weapon too.  Scott has a fancy pale blue outfit, and while Okino is in a very generic white robe, he comes with the new ponytail hair piece, which is fun because the ponytail includes a bar element that can be gripped.  The final fig is the Harumi avatar; I first thought she was in a prisoner's uniform, but I guess it's actually more of a standard orange jumpsuit.  Dunno if this is supposed to represent her returning to the series or just a depiction of her... haven't actually caught up on the last few seasons of Ninjago.

There are three marketplace stands, which look even less interesting because I didn't apply stickers.  One is a standard red / black arch, but I couldn't ruin the nice 6x6 teal tile with a sticker, so it stayed blank.  Then you have the weapons market, which has a lot of the green blades attached to it.  Some interesting connections, but still fairly simple.  The "Item Market" is even more generic with basic bars making up a hat stand (and a place for pink Zane to stand).  It's neat to get a lot of headgear to customize your figs, but display wise it's filler.

I mean, not a whole lot to really say about this set.  Great figs and accessories.  Lousy builds.  But I think for the price and number of figs, that's to be expected.  I am interested in getting a couple more of the substantial Ninjago Prime Empire sets to see how they build out the theme.