So now for my favorite set of the year so far... 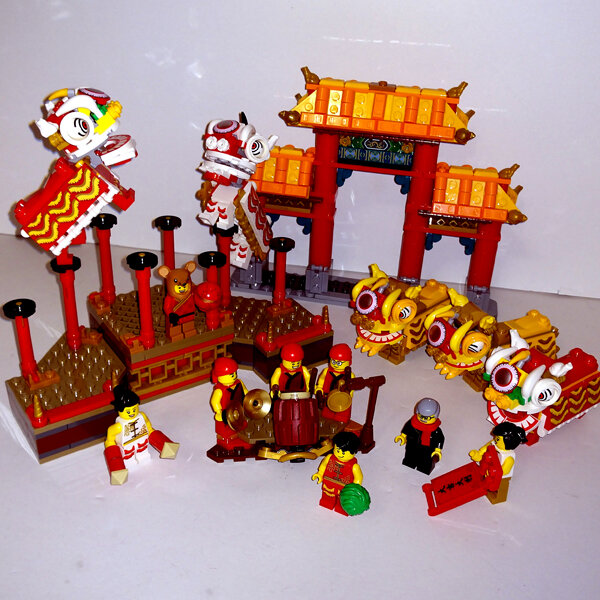 After Lego released really awesome Chinese New Year sets last year but only in, like, the area around China, it was really cool that they came up with another wave that got a worldwide release.  I gotta be honest; I'm not super familiar with the traditions depicted here, but the builds were a lot of fun and the piece selection is great, so I had to go all in for this set.

You get a stellar 8 minifigs in this set.  Yeah, the torsos get reused (as do the legs, both on the figs and the lions) but they really help set the mood for the celebration.  Highlights are the red scarf and the new mouse / rat costume head.  The band area is pretty basic, but using the bulky space wheel for a drum was imaginative.  The dance stage itself is pretty basic, but the design is also sturdy and allows for a lot of Lion poses.

The biggest draw to this set are the Lions themselves.  You get five of them; the builds are all the same but the colors vary.  You have two yellow-on-gold lions, two white-on-red lions, and one red-on-white lion.  The sides of the bodies have very awesome printed curved slopes to help detail the fabric designs with a few specialized plates to resemble the tassels.  The legs are just minifig legs stuck into a 2c6 brick; it's a design I've used plenty of times as a kid but I don't think I've seen it used like this in sets before.  (Somebody pointed out an Alpha Team robot inserted legs into a 1x2 brick, but not something like this to make a quadruped.)  It's kind of a shame you can't fit out the full performers beneath the costume, but it fits for the scale.

The most ingenious design is the head which uses some pieces in interesting angles to a great effect.  The forehead is a boat stud attached to a clip that's squeezed into place by a robot arm; it all works a little too well!  And then you have the banana eyebrows, the frog ears, and the awesome new balljoint eye printing.  And then a simple but effective jaw with printed quarter circle tiles.  There are a lot of nice recolors here, but I kind of don't want to take apart the lions to use them!

The largest build here is the temple design.  It's not quite as intricate as the one from the larger Chinese New Years set, but it still makes for a nice addition.  It had great color blocking, the the orange tiles contrasting against the Keetongu-orange roof, topped with golden frogs.  The teal highlights on the red pillars are also a nice touch, but I particularly like the printed bricks in the top arch, which make for a very ornate design.  It's not an overly complex build but it's sturdy and really stands out, making it a fine addition to the set.

While it is a bit early in the year, this set has been the best of the 2020 batch that I've picked up so far.  There's lots of great designs from the lions to the temple.  There's a lot of playability with the figs and the stage.  And when you finally are willing to take them apart, there are a lot of useful pieces too.  (Only new mold is the mouse helmet, I believe, but there are more useful recolors and printed elements than I'd want to list out.)  The price of $79.99 USD is a bit hefty, but for 882 pieces it's still a good deal.  Still, an easy recommendation.