Since us old fogeys love to sit around and reminisce about the "good ol' days", I figure as one of the few still-active remnants of BZPower's glory days, I have a unique platform to keep the old BIONICLE flame alive, both just for fun and for future edification of fans born well after BIONICLE's start that may need some insight on what the theme was like in the early years of the 21st century.

Today, I'll dive into the summer of 2005, the middle of a very convoluted year for BIONICLE. The first, in fact, if you ask me. The first big upset was, as a person living in the USA, only being able to obtain the Toa Hordika and Rahaga for the first half of the year. The Visorak, Roodaka, Sidorak, Keetongu, and the first BIONICLE playsets were all summer releases here. Lucky Europeans had been enjoying most of that (sans the playsets) since the year began. Feelings aside, this also created some storytelling difficulties, as in order to promote the Hordika in the USA, the magazines and comics couldn't really show off the Visorak or their masters. Unlike the case with the Vahki in 2004, there was no "substitute" enemy for the Toa to deal with until summer rolled around. Therefore, right out of the gate, we have the Hordika dealing with the Visorak and appearances of Roodaka, which was frustrating since there was no way to get the sets unless I wanted to buy foreign.

So that set the stage for summer 2005. That year, I would spend the longest time away from home alone (to date) at a summer academy for math and science. That would begin in late June, so I hoped the Visorak at least would start making an appearance on Wal-Mart shelves by then. No such luck. But anyways, I had another important distraction!

In 2004, I was one of the 50 first place winners of the LEGO Club Magazine Rahi Building Challenge. It was an amazing accomplishment for 15 year-old me, and it saved me a lot of money by having all six Vahki as my prize, along with a letter from the desk of Greg Farshtey himself congratulating me. Therefore, I hoped to have similar success in the Dark Hunter Building Challenge. By the start of summer vacation, I was just about done with him. I gave him no name, but after photography with my dad, he just christened him "Plasticman". My dad wasn't overly fond of my LEGO obsession, especially the BIONICLE component of it, but he humored me enough times, especially when it came to competitions like this. "Plasticman" was, in my opinion, a vast improvement over my Rahi from last year. Unlike my Rahi, he had a function! Instead of a left arm, he had a grafted wheel of assorted Kanohi Masks, pried from his fallen Toa foes (or other kinds of mask-wearing entities). By spinning a gear on his back, you could select the Kanohi he would use to augment his battle abilities. In this way, his species was able to utilize the power of the masks in a brutish way. In his remaining right hand, I gave him a "hunting staff", a probably remnant of his tribal upbringing before being recruited by the Dark Hunters.

As you might guess from the attached picture, his whole look and design was born from looking at a Rahkshi spine and thinking, "Hmm, this would make one wicked mohawk". One Metru shoulder armor and two Bohrok teeth later, and I pretty much had his head. The torso was a bit of a puzzle, particularly integrating the gears for driving the mask selection spinner, but I finished it and quickly assembled his hips. The Hordika chest armor and Metruan silver chest piece made for a great "loincloth", fusing a tribal look in clothing with a "punk" sensibility to the coloring and "hair" style.

With a week or so to spare before my departure for the North, I took my pictures of "Plasticman" with dad and mailed them to the LEGO Magazine. I wish I could remember the name and description I gave him, or even had a copy of the letter. But alas, that is lost to history, unless the LEGO Magazine keeps the photo and card in an archive somewhere. But the big news, of course, would be if I would win this time. Unfortunately, it was not to be. I was not selected even among the runners-up, and I lost again a chance to be a part of BIONICLE. You can look at the winners in the Official Dark Hunters Guide (if you own it; I don't). From what I've seen of them on BioSector01, I must admit I was a little out of my league. But I'll let you judge for yourself! Attached is my sole surviving photograph of my Dark Hunter. In all probability, I likely made a topic for him in the BBC Forum, but that was back in 2005 and is lost forever now.

That pretty much wrapped up my summer as far as BIONICLE went! When I came back from the academy in August, I managed to spend the remainder of living expenses money on a Visorak (Keelerak, I think), along with Roodaka and Sidorak. At that point, they were old hat to me, but the "Web of Shadows" movie was still on the horizon for October. Fall would bring more surprises (and even more convolutions!) to the BIONICLE story. 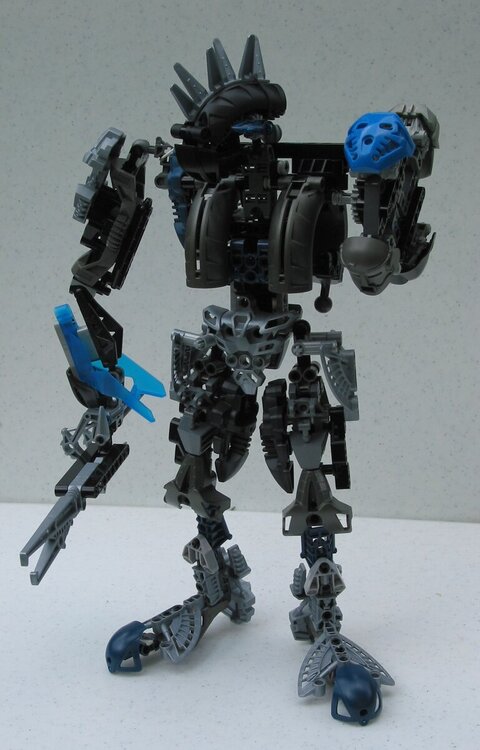