The video game style Prime Empire wave of Ninjago sets is interesting.  On one hand, I love the aesthetic they have going with the white and trans lime highlights, and the figs are all great.  On the other hand, some of the builds were... less than desirable.  Not so much that they were bad, but they didn’t stand out too much from the builds of previous Ninjago vehicles and dragons.  And I have sampled a lot of Ninjago sets over the years, so it's really easy to get bored with repeated designs.  But last winter I decided to test the waters with this set.  It’s $29.99 and has 322 pieces. 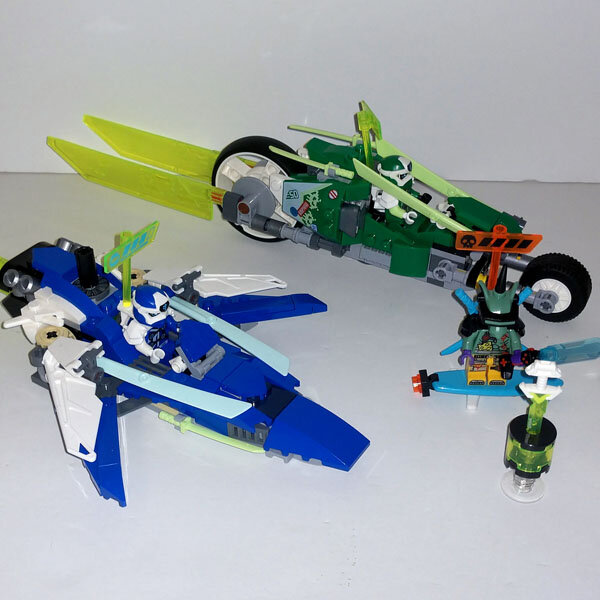 This was also the first set where I noticed Lego’s changes in the instructions, as Lloyd appeared a lot whenever you have to flip the set around, and it also had you build mirrored sides of the vehicles at the same time, something I just did automatically but is neat to see them implementing it for younger builders.

There are four basic structures here: Lloyd’s bike, Jay’s jet, Hausner’s surfboard, and the stand for the Key-Tana.  I do like how the Key-Tana piece can fit easily in an axle hole.  The surfboard has a few extra pieces slipped to it, but it’s not very impressive compared to the two other vehicles.

We’ve had a lot of Ninjago bikes before; there’s usually one in every wave.  For a while I was trying to do reviews on them all, but I got a bit burned out after a while.  Lloyd’s bike does have some sleek green elements, including the two wedge pieces with legit printing on em.  I guess the big back wheel is also fairly new; it’s the first one I got.  And the angled front blades and the trailing TRON style back blades are nice touches.  Unfortunately, the bike isn’t exactly well balanced, and it doesn’t have any kickstand to support it.  You can somewhat balance it, but because the back wheel’s tire surface is not quite flat, it topples over easily.  I’m not exactly blown away by this bike, having built many others before, but it’s still pretty good and colored nicely to fit into a video game race.

Jay’s jet is a bit better, with a sleeker feel to it too, and the blue / white color scheme really pops.  It makes good use of blades wings, curves slopes, and wedges to make this look very aerodynamic.  My favorite design is the angles boomerangs used on the back!  There’s a technic connectors in the center, and you can inset the Key-Tana and fold out the wings, which is a nice feature too.  However... Ninjago has done its share of jets too, and many also have this wing spreading function built in too.  This one might be on the smallest scale, but it does mean the gear connections are a little loose to accommodate the small size.  Yes, maybe some of the other, larger jets pull off the look better, but to have two midsized vehicles in one $30 set is still a pretty good value for play.  I mean, you can legitimately race these two, which isn’t always possible with vehicle sets, so I appreciate that.

The figs are great.  I didn’t really talk about the Digi outfits in my previous review, but I really love the white and primary color designs they have, and the technical designs for the faces are nice too.  To top it off, giving them game controllers as the handles for their weapons was super creative.  (And you can’t really tell from my pictures, but the controller pieces are also used to control the two vehicles.)  The life icons on their backs are a little bulky and get in the way of play and display, but they’re easily removed, and it’s another neat way to connect the characters to the game.  In this set, their enemy is a rat-like avatar named Hausner, who also makes for an unusual character but it kind of works.  (Hey, at least the rats are different than more snakes.)

I’m not sure if this is the best valued set in the wave; I’ve heard good things about the dragons, the car, and the final temple.  I just personally wasn’t interested in those so went for these.  I wouldn’t say they’re the greatest Ninjago vehicles ever, but they’re still good, and there are more than a few nice pieces mixed in with the cool figs.  So yeah, worth it.