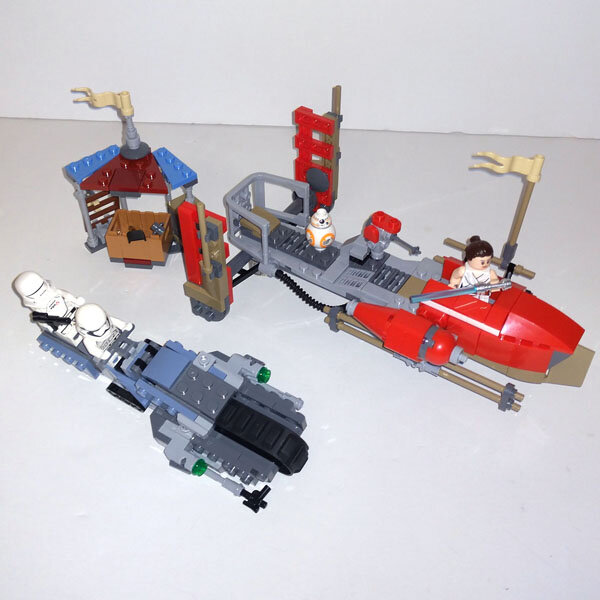 Opinions of Rise of Skywalker were mixed.  Some people hated it.  I assume others didn’t?  I walked out of the theater somewhat satisfied, but there were certainly some problems with the storytelling, and I did not have the same desire to rewatch it compared to some of the other movies.  And on top of that, most of the sets from the movie weren’t super interesting either.  (I mean, okay, they’re not bad designs per say, but they’re repeating vehicle designs again with slight modifications.  And yes, I did pick up a Y-Wing and enjoyed building it, but that was because it was my first Y-Wing.)  Either way, the Pasaana Speeder Chase has got to be the wackiest of the wave, but it was the only one with Rey and... well, nope, got nothing else, that was my primary reason to pick it up.  $39.99 for 373 pieces isn’t bad for Star Wars, but it’s not exactly a steal either.

The more solid build was actually the Stormtroopers little speeder bike.  It’s a compact design, but they did some neat stuff with surrounding the treads with panels, and the clipped top panel does a good job of covering the treads without getting in the way, even if it can be easily lifted up.  The use of sand blue wedge plates and curved slopes is appreciated too.  There’s also a little tent stand where some gear can be stored; nothing too exciting but it works for a “weapons rack” display piece.

The rest of the build is on the red speeder bike... thing.  I guess it’s not too dissimilar to the Desert Skiff from Return of the Jedi, but it’s mostly a weird speeding platform, not super iconic.  The red wedges at the front do offer a nice design, and the engine bit is held up at an angle which is nice.  The back panels are a bit more haphazard, although the clever use of the crash bar piece on the back is well done.  Although I’m sure this thing is supposed to carry a bunch of people, there’s little room to accommodate many figs, and a severe lack of guardrails.  I guess it’s somewhat reminiscent of the vehicle from the movie, and I can’t blame the set designers if the official vehicle is a bit of a mess.  But this ain’t going to be one of the iconic Star Wars speeders people will remember.

For the figs, you get Rey, BB8, a First Order Stormtrooper (generic), and a First Order Jet Trooper (apparently unique to the set.)  Beyond the jetpack element and different helmet style, the Jet Trooper is not too much different than the Stormtrooper; I’m sure super fans would obsess over the minor details in the armor, but they look pretty bland to me.  BB8 is the same as always, but I can’t fault him because he’s a great fig and another is never a bad thing.  But, as I hinted at earlier, Rey is the main reason I picked up this set.  The previous Rey figs were somewhat bland compared to her character, whereas this one has the flesh arms and detailed leg and torso printing that match the character from the movies a lot better.

Is the set worth it for just the one fig?  Probably not, but I got it during the Star Wars day sales so the pieces will make it worthwhile.  But beyond the characters and pieces (which aren’t too exclusive) this is some minor vehicles from an unpopular movie.  I know fans do want a Lego set of EVERY vehicle from the Star Wars universe, so they might as well get this one over with while the movie was out.  But would I recommend it?  Nope, not unless you’re a major collector.  (Again, I mostly did it to fulfill the Star Wars min purchase requirement for Star Wars day.)