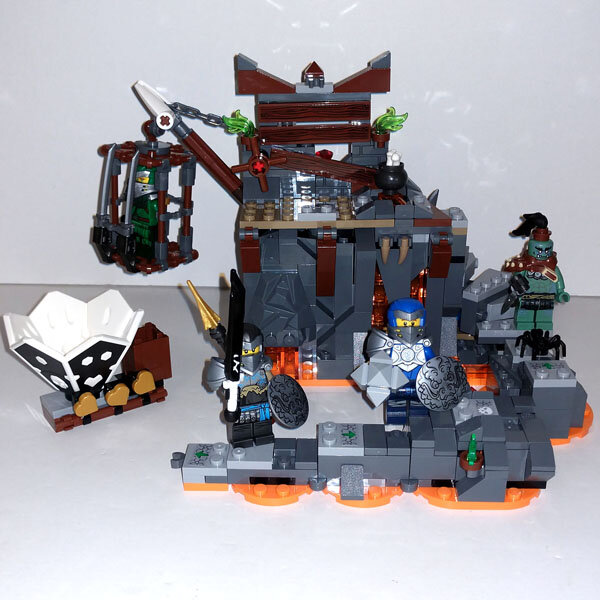 I'm a sucker for Ninjago sets, and the new Skull Dungeons theme looks pretty crazy.  I want some of the larger sets but don't currently have the budget for them, so I picked up the cheaper one earlier this year to get the figs and get into the theme.  It's 401 pieces for $29.99, so not a bad value.

So this small set doesn't appear to be any major location, but mostly builds a rock ledge with some steps leading up to it.  That premise is actually kind of boring, if I'm being honest, but the bricks will be useful if I want to make more MOCs that use rockwork designs in em.  The main trail of steps are connected to hinges so you can rotate them a bit; this is incorporated into attaching this set to the others and build up a massive board for some sort of game. The concept is interesting, but it doesn't really add a whole lot to this small set alone.  The spiral stairs that lead up to the top of the rocks is a more interesting design; not unprecedented but still solid.  The rock wall features some wooden panels and trans orange lava flowing by, which helps build up the scene.   There's a small wooden fence on the top (where the black sword is stored, I guess) and there's a pulley system attached to a small cage.  The cage is well done, but it does use techniques from previous sets (some in the Ninjago theme, although it also reminds me of Pirate of the Caribbean.) The back is mostly empty, but I think it's supposed to be the sleeping quarters for the troll.  There's also a few torches utilizing the flame piece in trans green, which is a plus.

There's a small side build that includes a stand for the character and three hearts which goes with the board game setup.  Instead of a character, I put the new spinner on it in the photos.  The new spinner piece is cleverly also a dice; it has a hexagon style build with one, two, or three dots printed; so you spin it and whichever side is facing up is your roll number.  A fun way to incorporate spinjitzu into the game.

I have a habit of collecting all the Ninja figs, and you get three in this set: Jay, Lloyd, and Nya.  They're extra armored up here, with massive shoulder places and extra silver printing on their torsos.  In addition to some standard weapons, they also have shields with dragon prints on em!  There's also a sand green troll who wouldn't look out of place in a fantasy castle theme.

Honestly, while this set has some benefits, it's pretty lacking, especially compared to some of the larger sets like the full Skull Dungeons or the Bone Dragon.  It feels very much like a supplemental set to add onto the larger ones; it gives you a taste of the full theme at a cheaper price point, but doesn't quite hold up on its own.  And yet, it has three Ninja, the new spinner, the fancy black sword, and the crazy green flame elements.  I feel like if you can afford it, the larger sets would be more appealing.