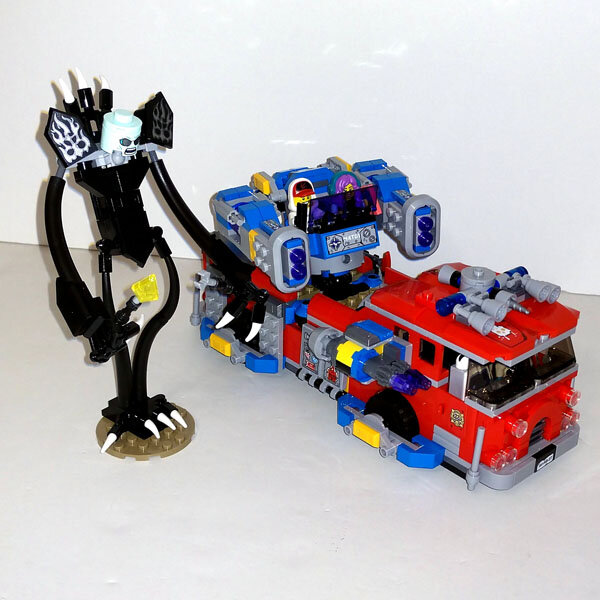 The first wave of Hidden Side was pretty great, but the second wave was lackluster.  Designs improved again in the third wave, and I think the highlight is the Phantom Fire Truck.  It goes for $59.99 and has 760 pieces, including some newer elements.  Not bad.

This reminds me of the upgraded school bus from last year.  The front of the fire truck is well done and lots of nice details.  In particular, I like the wheel guard designs they came up with here, very clever.  Inside the cab also has a small living space with a computer monitor (sorry, no picture of that) but I did find the top a bit tough to take off; it tends to take too many pieces off when I do.  The back of the truck looks okay, even if the blue turret is a bit of an odd attachment.

But then suddenly the back shifts and a mech steps off the truck.  And I'll be honest; I was only lukewarm towards the set until I learned about the transforming feature.  The mech itself isn't super well proportioned; the leg joints are a bit clunky, to be honest.  But the fact that the legs fold up and transform quite seamlessly into the back of the truck is cool enough to forgive all the other flaws.  And, to be fair, the turret arms look pretty crazy, especially with the multi-layered disc design they used.

The main enemy is this spindly ghost guy.  His legs are made up of black vines attached to a standard base, but surprisingly he had a couple of poses you can put him in (even if some put him off balance.)  And honestly, you don't often have a figure shaped like this, so I'll give them credit for being innovative with him too.

The figs are a standard batch of the Ghost fighters or whatever; I'm not sure there's too much different between them here and their versions in the School Bus.  You do get one spooky black fig, who has a neat transparent head.  The new walking computer is a nice callback to Alpha Team.  Speaking of callbacks, there are a lot of references to old themes in the stickers, but the most important one is the Hau.  I always appreciate Bionicle references, and they may influence my decisions to buy these larger sets sometimes.

Overall, this is a solid set with a good cast of figs and a fun transforming feature.  And the pieces are good too.  I haven't grabbed any of the other wave 3 sets, but I picked up this one because it looked the best of the batch and it does not disappoint.  (And maybe there won't be any more Hidden Side sets next year, so it's worth getting this one to end the theme with a bang.)