I got a handful of Ninjago sets this last month, so I'll start out the new year by looking at some of the Ninjago "Master of the Mountain" sets from last year! 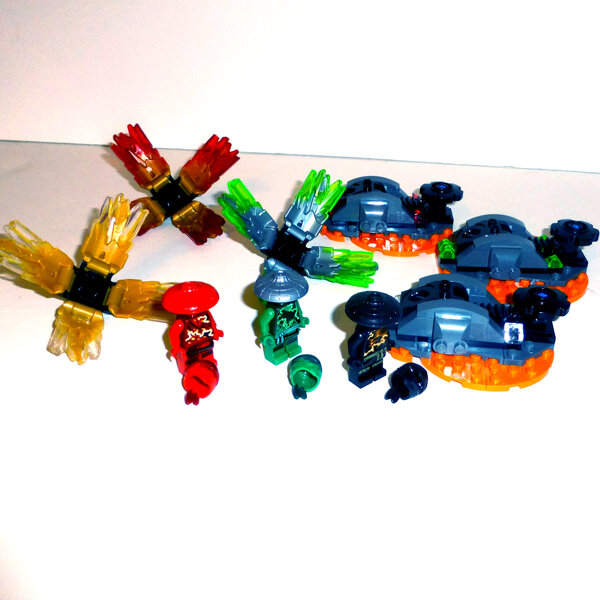 In case it wasn't obvious, I'm a sucker for exclusive Ninjago figs, and the various spinner packs are always enticing for their new figs, even if they are generally lackluster in the builds.  This batch is another spinner you set off by slamming a lever, not unlike the Spinjitzu Slam sets from 2019.  Unfortunately, only three were released, so you only get Cole, Kai, and Lloyd.  This irks me, because as a completionist, I am now left without Jay, Zane, or Nya.  (And like the Arcade packs only came with Jay, Kai, and Lloyd, and last year's Spinjitzu slam only featured Lloyd, Kai, Zane, and Jay.  Nya seems to get left out of all of these packs.)  (Plus I just caught up on the show, and only Cole actually does the Spinjitzu Slam, so what are Kai and Lloyd trying to do here??)

The figs themselves are actually pretty neat, with elemental energy torso designs and new head prints.  They also come with rounded straw hats, and when I got a red and black hat out of Cole and Kai, I was hopeful for a new green variant for Lloyd, but alas he only gets a boring silver hat that doesn't really match with his scheme at all.

The spinners themselves are new.  The central bit has a stud connection for the ninjas and then bar attachments on four sides, so maybe reusable.  The various fins are crystalline and come in some neat colors, but the problem is they're only connection point is a bar clip... and I'm not sure how secure it would be in different bar settings.  When you rubber band them together, they hold together and form a Spinjitzu tornado, and the rounded straw hats actually fill out the top nicely.

The bases (and the main build) for all three sets are pretty much identical, with the only difference being the colored trans 1x1 piece decorations.  The coloring fits in with the rock and lava style from the main sets, but it would've been nicer if it wasn't the same exact repeat three times; previous spinners have done their bases in different colors, why couldn't we have had that again?

Anyway, the idea is you position the spinners on the base, slam down on the lever, and send them spinning.  The results vary.  You need to apply a lot of force to get them started, so anything half hearted just causes them to immediately slump over.  If you can get them moving fast enough, the fins actually fan out as it spins, which is neat.  Otherwise, it's a classic Ninjago top.  Fun for a little bit, but replay value seems limited (I mean how long can you be entertained by spinners.  They've pulled this gimmick off quite a lot and I'm sure it's getting old.)  And, of course, there's no real display value.

So overall.  It's fun, and if you haven't gotten one of these before it could be nice to pick up and test out a bit.  And some of the fin pieces could be nice to use in sets, and of course the unique figs are a draw.  But unless you want all the figs, not really worth picking up multiple copies.  (Alas, I am in the former, and will always beckon to the call of impulse spinner sets with unique figs.)