And now to move onto the biggest set of the themes... 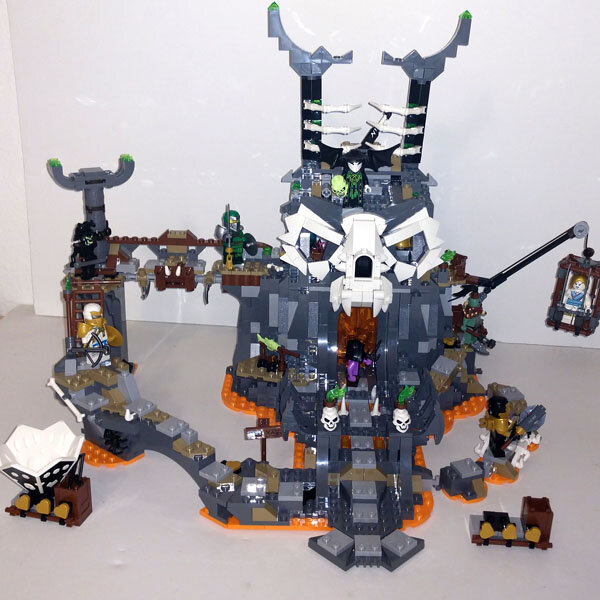 Ninjago has done a bunch of big based before, but something about this one feels like more of the adventurer big sets from the late 90s... y'know, the ones I never was able to buy but admired a lot in the magazines.  Part of this has to do with the game board setup, where you have paths leading up and around the temple, giving it more of a sense of adventure than a standard building or temple.  The rocky structure works out nicely, but the detailed skull design that fits atop it really draws the eyes, and the underlying orange plates as lava add to the environmental feel.  On the main level, you have a campfire on one side of the skull and a weapons cache on the other.  Meanwhile, on the back side of the mountain you have the Skull Sorcerer's office, complete with some nice decorations and a portrait of him before he got all skull-faced.  The right path is pretty meager and comparable to the paths seen in some of the smaller sets, although it features a mini stone bridge.  The left path has a more substantial bridge and uses a neat trick to extend the ladder up towards the tower without actually connecting to it.  To add to the game play, there are also hidden hearts and weapons along the paths.  (I tried to look up the rules for the board game but it's so generic that I think you're better off customizing them yourself.)

There are a couple of fun action features squeezed into the landscape too.  If you push the pathway beneath the skull's mouth, you can open the doorway to one of the swords.  (This is a fun feature that has been utilized a few times before, like in one of the Elves castles, but it's still a good one.)  You also have a lever you can pull back on the top to send back the spikes and reveal the other sword.  Meanwhile, if you turn the tower on the left, you activate all sorts of sequences.  It causes blades to spin on the bridge and raises / lowers the cage on the far right.  (The cage, meanwhile, is the exact same design from the cheaper set.)  The most ambitious part, however, is the paths leading up to the skull, which the sequence causes to rise and fall.  The latter one does have a tendency to get stuck so it's not quite as fluid as I would've liked, but it's impressive.  And the main tower uses a rubber piece to lock the turns, so you don't have a lot of slack running through the full thing.

You get a full selection of figs to play with too.  Lloyd, Zane, and Cole fill out the Ninja roster (the other half of the team is in the skeleton dragon set.)  You also get the troll Munce character and the goblin Ginkle character, who turn out to be Ninja allies in the show.  The black Skeleton warrior is not tho, but he's generic so it's okay to hate him.  The Skull Sorcerer is nicely detailed, and the same as he was in the dragon set.  Unique to this set is Vania, who has her own unique color scheme that really stands out in the dungeons.  Also two game play stands and a dice spinner.

As a play set, I think this might be one of the better Ninjago sets from the whole theme.  The concept of tying all the sets together as a board-game really adds to their play value, and I could see younger kids spending a lot of time with this set with all the adventures it offers.  From a purely display angle, it's not the most picturesque with some of the flimsy paths, but the skull design certainly holds its own.  It makes a worthwhile set for any Ninjago fan... s'long as they can afford it, because it is on the pricey side.