Yeah, so this isn't quite a standard review, but rather a discussion about the theme and the TV series.

I actually fell behind on the Ninjago TV series and recently caught up with it on Netflix.  The shorter episodes were a bit off-putting, but they still tell a decent story, with the occasional break to focus purely on side characters.  (And the fact that sometimes they switch to a more anime-like animation style was neat too.)  The fact that the last season heavily focused on Cole was bittersweet after the passing of his voice actor, Kirby Morrow.  For the character, I liked how he was able to connect to his mother's past as another Earth elemental, some of the scenes were pretty moving.  And even so, plenty of the other characters got their chances to shine, which is not something all seasons of the show have been able to pull off.  And yes, the action and humor is generally aimed for a younger audience so it would be mild for most adults, but I enjoyed how they incorporated all the sets and characters (and annoyed at some of the characters and locations that didn't get properly featured in sets.  That fancy city had potential.)  The best joke was also their take on the LotR quote with "You shall not... be granted permission to transverse beyond this point." 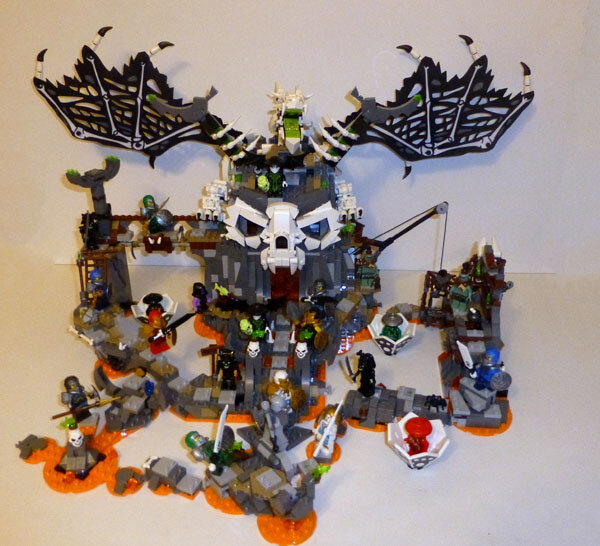 Now, for the sets, there was the whole concept this year of combining them into larger portions to make a large board game.  I ended up getting 71717 Journey to the Skull Dungeons, 71721 Skull Sorcerer's Dragon, and 71722 Skull Sorcerer's Dungeons.  Journey and Dungeons have the bigger landscape pieces that look like they fit together the best (kinda reminds me of the Helms Deep set and then the wall extension set that were clearly made to go together.)  Journey on it's own is lackluster, but it still provides a more substantial landscape than in the Dragon set.  (And the Dragon set has better landscapes than the other sets, from the looks of it.)  Still, the adjustable pathways are a bit of a mess when you try to connect them all, and I wasn't really able to get all the loops properly connected.  It is nice to have a full set of the Ninja; always cool to see the team all together.  And, of course, I tried to pair up all the dragons I had built with the Skull Dragon to show off it's massive size.

Anyway, this was a fun theme for Ninjago and I think the theme is still doing alright.  A new mech and dragon every year is fine with me, especially as the designs keep changing and bringing something new to the table.  And the show still seems to be doing well; not bogged down too much in the story of previous years but still alluding to it when appropriate. (Although it is a bit annoying when they're falling and in trouble and we forget that a few years ago they had Airjitzu that they could use to fly).

I look forward to see where they're going with the theme next.