This was the beginning...

Exactly twenty years ago, the legend of BIONICLE officially began for me with the arrival of a small box at my doorstep. In that box were two LEGO sets that would change my life. One was Tahu and the other was Turaga Vakama, but in the early afternoon of March 25th, 2001, those were pretty much just random names to me. But by that evening, they would represent characters almost as real as I was.

I won't go into the review of the builds, but as I assembled each of the two Fire characters, I sensed something more important was at work than in my previous LEGO set assemblies. The hints were in the pictures glimpsed on the canister and on the instruction pages themselves, but the full effect was only realized when I held the completed Toa in my hands. No more slick CGI; Tahu was tough, shiny, fierce, and seemingly alive. His eyes caught the sunlight in my room just right, and I almost swore they pulsed in brightness, a kind of biomechanical blink.

Outside, the effect was even more pronounced. I tried to show this in amazement to my dad, but he dismissed my enthusiasm, already weary of yet another LEGO toy in his son's life. Parents just don't get it.

Back inside, I dove headlong into the knowledge locked away in the mini CD-ROM. Just as Tahu as an entity clicked together in my hands, his background and the story of Mata Nui started to click together in my mind. I was glimpsing another world, a world extremely different from my own. Nevertheless, it was a world I could imagine, a world I could experience more of through Tahu and Vakama, and eventually, the other Toa and Turaga as well.

That night, I drew the cover image attached to this blog, a portrait of the reassembled Tahu on a crest of sand on the beach. I knew he did the reassembly on his own, but I too had a hand in that. It was a connection between worlds real and imaginary. Even though I was twelve years old and on the tail end of a stuffy and unpleasant sixth grade year, this was a last gasp of the magical in my life, a spark of wonder as adolescence loomed and all these changes threatened to overwrite who I thought I was.

Well, twenty years ago today, that didn't happen thanks to Tahu and Turaga Vakama. That isn't to say there weren't massive changes; obstacles and victories alike that would have repercussions for the lives of both my friends and I. I can't speak entirely for them, but I at least was not ever undertaking the odyssey of Growing Up alone. Whatever I faced, I did it alongside the legend of the BIONICLE.

And the darkness couldn't stand before us! 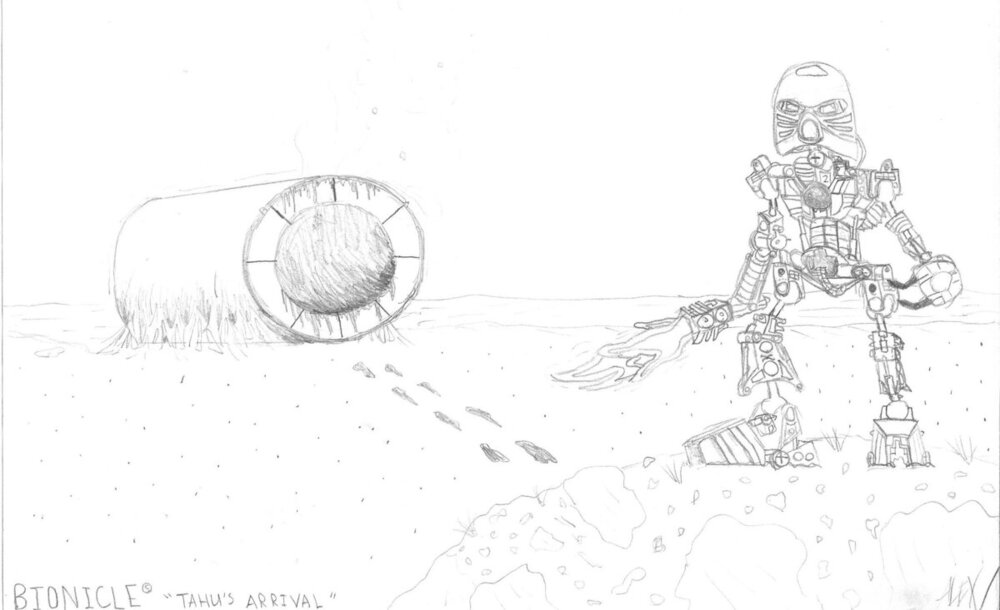