So back in January this year, I was getting into the groove to start doing mini blog set reviews again.  I had figured out the best way to deal with the pictures; cover shots saved on BZP, the rest linked to on Instagram, ext.  Whole deal figured out, just needed to build, photograph (with mixed results, to be honest), and write.  But then, my computer of 7 years crashed.  After two months of trying to fix it with mixed results, I got a brand-new computer, and then I was busy setting up stuff on it, which meant reinstalling software, transferring files, ext.  Well, then after almost exactly a month, that went down.  Since it was brand new it was still under warranty so I was able to ship it off and have them fix it, but it was a graphics card issue, and of course graphics cards are in short supply thanks to stupid bitcoin mining stuff, so that was another two months wait before I was able to get my computer back up.  (Which involved trying to organize a quick group mosaic organized without Photoshop to help me out, still glad we got it done in time for BrickFair.)  This essentially shut me down from doing these mini reviews (and even a front page review too).  I’ve still collected sets and taken pictures, so now it’s time to do a rapid fire posting of various opinion pieces of sets from 2021!  Anyway, boring buildup explanation aside, onto my review ramblings!! 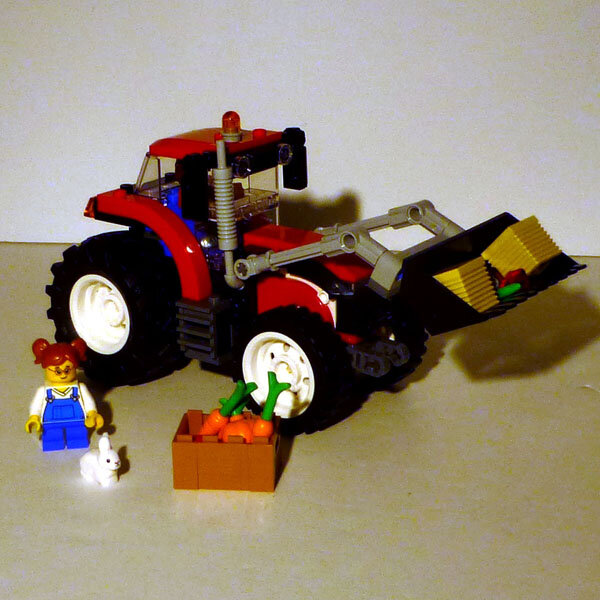 This was one of the first sets I got at the beginning of the year.  Honestly, I mostly got it for the pieces, but it has a solid build as well.  Farming has been a Lego subtheme for a long time; I think even some of the pre-plastic Lego toys were tractors.  (There was even an article about that recently.)   Although it’s not quite as prevalent as Police or Firefighters, it’s a fun theme to revisit.  (And better to have more farmers than a Lego City Police State.)

You get three characters; the farmer, his daughter, and a bunny.  Both figs reuse generic overall torsos, but it’s fitting here so I’ll allow it.  The bunny is also fairly uncommon, and this is one of the cheapest sets it’s in.  Plus, you get some carrots, an apple, and a pumpkin, so some neat food items.  In terms of actual pieces, this set had a few new ones that caught my eye, particularly the 2x2x2 brick element with ridges on the side.  The ridges match with the standard modified brick, but they’re on all four sides so it would work well in corners, and the 2 plate height allows for some new versatility.  You get four of these pieces in black (used in the tractor’s interior) and four in tan (to represent hay) so that’s a good supply of a new element in a fairly affordable set.  There also the new technic brick element, which I’m sure will have its uses.  It’s mostly remarkable here because this is the first set it appeared in.  The big back tires are also rare, only appearing in a large technic set.  I guess the new 2x6x1 bracket in black was also rare, and the bucket element appears to be exclusive too.  Like I said, a bunch of fun pieces, especially for a City set.

The tractor itself is a satisfying build.  The back area has some blue detailing in the interior, but the outside shell is predominantly red.  The front loader has a simple but effective mechanism to scoop up stuff.  There’s even a trailer hitch on the back to hook up more stuff.  And the shaping makes it quite distinctive with a good flow using the curved slopes and arches.

It’s a fun little set.  I got it for the parts but still haven’t taken it apart yet, heh.  Worthwhile for a City vehicle.