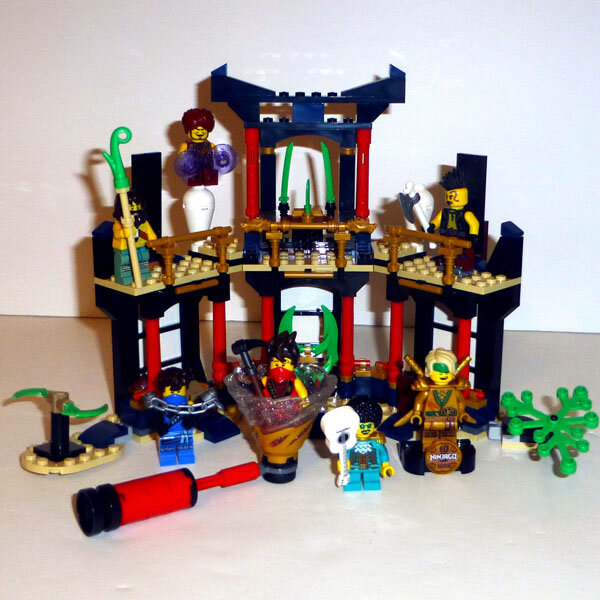 The Tournament of Elements season was one of my favorite of the Ninjago show, so it’s cool to see a legacy set recreating scenes from it.  Of course, the actual building isn’t super impressive; it’s a similar angled interior design that we’ve seen in other cheap Ninjago sets before, with the benefit of being two levels to allow for some vertical action.  There’s fun placement of the various jade blades (including some hidden inside the white vases) as well as a compartment for the McGuffin book.  Simple, but it works for the price, so I’ll take it.

The minifigures are the obvious draw to the set, as you get a whopping 7 of them, including three brand new Elemental Masters for the first time.  Obviously you need some of the Ninjas; Kai and Jay appear in their tournament outfits that are used across the Legacy theme.  The chase fig in this set is Golden Lloyd, one of six golden figs placed throughout the Legacy sets that you’ll need to buy all of to form the full team.  (I know I’m hooked on it, doesn’t mean I don’t recognize the marketing ploy.)  In particular, this set had Lloyd’s new headgear piece from the Jungle sets, but it came out three months before those sets.  Fun designs.  You also get a Spinjitzu tornado and a handle to spin it around, a fun function to include in these sets.  Also Eyezor makes an appearance as a filler baddie.

The main draw are the three Elemental Masters: Bolobo, Gravis, and Jacob.  Bolobo’s main feature is his beard, but he has a bare torso with some tattoos printed on him, and carries his plant staff.  Gravis has a simple red outfit and turban, and his gravity powers are represented using purple dishes.  Jacob, meanwhile, has a snazzy teal suit and his sonic guitar.  Together, they help fill out most of the cast of Elemental Masters.  (We’re still missing Chamille though.)

As a build, this isn’t the most impressive set.  But man is it packed with figs, so I think it is very much worth it.  And the figs are varied enough that even non-Ninjago fans can appreciate them.  Also like the green weapons pack included here.  So very worthwhile one to pick up.