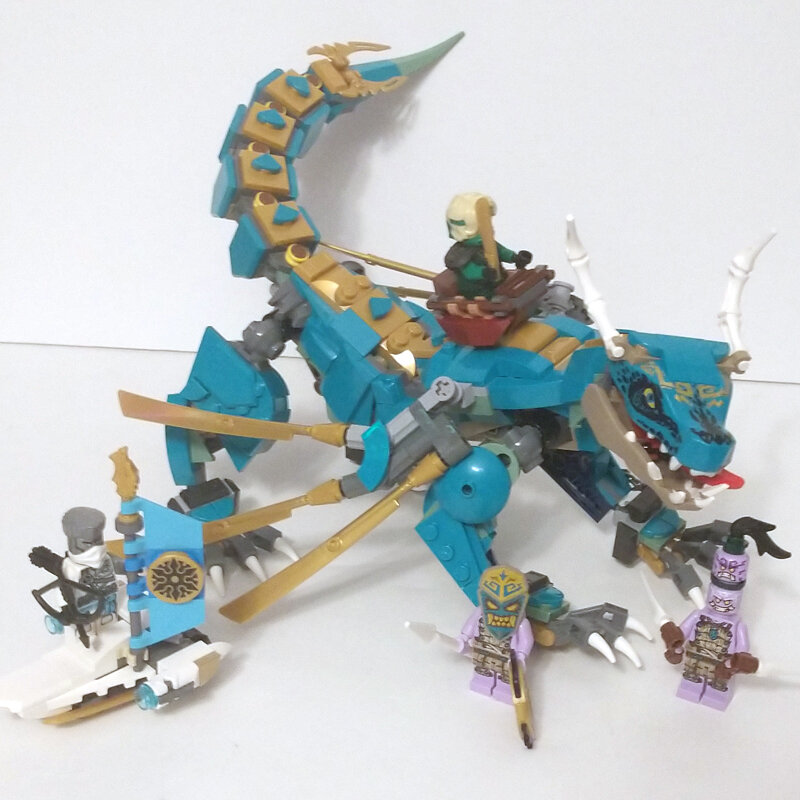 Ninjago always has to do dragons, and I’ve appreciated how they’ve continued to crank out various fun designs over the years.  The Jungle Dragon brings on a slightly revamped design but with a lot of teal, so what’s not to love?  Also featuring the new Island / Jungle theme, so a new round of characters!

You get four figs: Jungle Lloyd, Jungle Zane, PoulErik, and Thunder Keeper.  The two islanders share the same torso design, with grass woven armor and lavender skin.  Thunder Keeper has a brilliant looking mask, while PoulEric has two stacked heads, which is a fun concept.  The new Ninja outfits include some new rugged textures, and Lloyd shows off his new hairpiece.  Zane also has a little sailboat mini-build, keeping with the Ninja boat designs for the theme.  It’s compact but still captures the same essence as the larger catamarans.

The most interesting part of the build is that the dragon comes with a angled bend in the middle of its back, giving it an odd bent appearance that makes posing it a bit interesting.  This also means that the legs, which are fairly short and lack elbow joints (per usual), don’t have a lot of range of motion; they mostly need to be extended all the way down to keep the dragon’s lowered belly off the ground.  I’m not entirely thrilled with the design.  On one hand, it gives the dragon a somewhat more canine and playful appearance, but I have not been happy with the posability of the whole thing.  I don’t know the best ways to fix it either; the bend in the body could be on a joint, but the design is built around a rigid structure and adding another joint might be too weak to hold it together during play.  The tail design is again loosely connected via technic axles, so it flops back and forth (which again makes it kind of dog-like.)  The wings are also very bare-bones and difficult to pose well.  The head makes good use of the new mold elements, and the attachment for the jaw does allow for the tongue to hang out, which just solidified the dog-ness of this dragon.

I’m not super impressed with the build, to be honest.  And yet, for all that it’s lacking, this dragon has character!.  The head is very expressive, the few poses it can be in makes it look more playful and less intimidating than previous dragons, and the teal and gold color scheme works extremely well.  So, in the end, I have to say that this dragon is indeed worthwhile.  Plus, lots of teal pieces and some nice figs (including an exclusive Zane) meant that it was a must buy for me.