...why i am i still doing this? i could be having a Christmas party, or baking a cake, or posting something nice and helpful, or.....

The Christmas Tree is a 1991 animated film about a bunch of orphans: 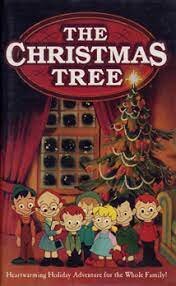 who believe that a pine tree will grant them a family.

They live under the evil rule of Ms. Mavilda: 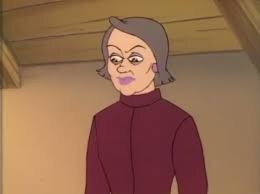 Who hates them and stuff because she's evil. the film begins by explaining that every time the town's mayor donates to the orphanage, she takes the money and gambles it all away with her friends because she is a villain. 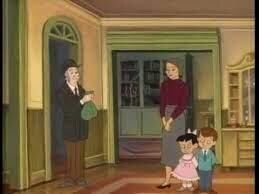 Why does the mayor keep giving her this money? because she has some nice clothing which she puts on whichever children she's going to show off to the mayor, which convinces him that the kids have nice things and live pleasantly, then once he's left she puts the clothing back in the cupboard and leaves the kids back in their ragged clothes. the film then shows and says that a couple with two kids have moved to this town (which doesn't appear to be in any definable era, it has steam trains and but also neon lights.) in search of a better life. they go to the mayor of the town, who says that the father can work at the lumber mill if he lives in a boarding house without his children and wife while they go live at Mavilda's orphanage. How this is a "better" life is unclear. so they agree to this weird deal, and the wife (named Judy) and kids (a boy and a girl, Pappy and Lily respectively) go to the orphanage. Judy now works at the orphanage as Ms Mavilda's assistant .the children (Judy's)are made to sleep in the same room as the other orphans. .They befriend the other children. 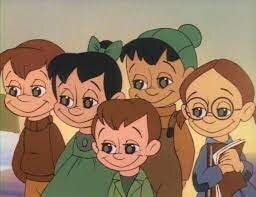 Yes, they do look like that. in fact, the movement of the characters reminds me of the Zelda CD-I animations. So the orphans and Judy make friends. they explain to her about the sacred tree, then they tell her about their dog (i forgot to mention they have a dog called licorice) then there is a montage of Judy building a swing and slide for the orphans near the tree (who is named Mrs. Hopewell for some reason.)  Ms Mavilda is infuriated at this and yells at Judy for this and then lets her off because she was doing all this after her working hours. another montage ensues showing Judy and the kids having fun around their sacred tree. The yet another montage happens and the narrator says that it's now Christmas time. So mayor gives Mavilda the money and tells her it's for the kids's Christmas presents. Judy is offered to help Mavilda choose something nice for the kids, but that means Mavilda won't get to spend all the money on gambling. So Judy goes upstairs to tell the kids about this money and such, while Mavilda calls her friends on the phone: "Hello? Frank? Mavilda. Do you feel lucky tonight? hahahaha evil laughter hahaha" Upstairs, Judy tells the kids all about Christmas because Ms Mavilda is apparently so cruel she doesn't even tell them about Christmas and it's various traditions. Mavilda is still gambling, and apparently failing to win anything. Judy tells the kids about Santa, and how he lets good boys and girls make a wish for Christmas, and how he can do anything. The kids tell Judy their Christmas wishes and then Judy says she's gonna write a letter to Santa telling him about all the wishes. Ms Mavilda, meanwhile, appears to be winning whatever game she and her friends are playing. Then it is revealed that one of her friends (named Helen) has five cards of the same suit, which apparently wins her the game. Mavilda is infuriated, and we cut to a scene of her waking up the next day. She complains about a hangover (apparently she got drunk the previous night, go figure.) And then hears a knock on her door, signifying that Judy is there. Mavilda realizes that without the money, she can't buy new clothes for the children.(she has a brief conversation with herself to come to this conclusion.) Judy comes in and asks about the shopping trip, and Mavilda tells her that they won't be going. In this scene Mavilda's mood changes rather frequently, from angry: "Don't let the children play outside!!" to cruel: "Be sure to tell them the 'good news' about the clothes!"

I don't want to review this ALL today, so keep yer eyes out for part 2 of the review soon.

watch it here,  and maybe comment about what you think i should talk about in part 2.