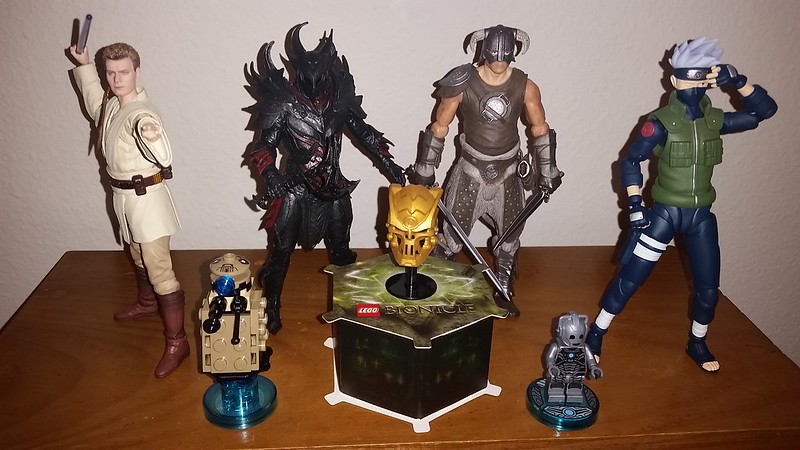 I sort of got back into getting BIONICLE this month. Thanks to a tip on the BZP Facebook page, found a pretty good deal on eBay so decided not to pass it up and got the villain pack. I kind of want... a lot now. Just for that base. It's cool displaying the masks on it, although yeah the stand itself is bad. Very pretty mask too. Still don't know when I'll get into my 2015 backlog and start 2016... March is looking to be a light month in regards to my pre-orders hmm..

Still haven't gotten any of the big games I've been wanting, but I realized there's nothing coming out for a good long while that I do want. So now I'm in no rush and just going to enjoy what I have first. Which is why I spent all month playing Majora's Mask. And now the next installment of Assassin's Creed Chronicles. I sure wish they had announced there would be a physical release when China was released, because I honestly would have waited until then. But since I already have China and don't want to just re-buy that (since it's literally the price of all three, no discount for waiting or getting them bundled, which is pretty lame), I figured I'd just get the rest downloaded to. Meh.

Finally got the Funko Legacy Skyrim figures I'd been putting off. Still can't believe it took this long to get action figures based off of Skyrim. Everything I've read about the Funko Legacy line of toys is... not great. At all. Particularly their Game of Thrones toys. The Skyrim ones are generally acknowledged as an improvement and so far I don't have issues with them falling apart or breaking. My Dovahkiin did come out of the package with a warped leg that really bugs me though I'm hesitant to fix, having not done that before and not wanting to screw it up. But they look great, have decent ranges of articulation, and I just think they're pretty cool.

Bandai's continuing to pump out prequel Figuarts and I love it. Obi-Wan's pretty good. Nothing exceptional I feel (though how they handled the robes is pretty cool... so many parts of it move) but nothing bad either. Just need a Gui-Gon now. Kakashi may be the best Naruto release yet if only for accessories. Still think the face options could be improved, but it's a lot better than the dismal amount we got with Sasuke. And they're using a new style of hips on him that is alright. Does allow a good range of movement.

Oh and I couldn't pass on the sale last week on the Dimensions Fun Packs. So of course I got the Doctor Who one. Love the Cyberman minifig and honestly think it's pretty cool to have a couple different builds of a Dalek now. Still no plans to get the game, but in terms of toys-to-life they're pretty great in the toy department. Which makes sense. Since they're LEGO.