Recently I was reading "The Hedge Knight" graphic novel, which is based on a "A Game of Thrones" prequel and there is one bit where two characters are discussing a particularly mean and nasty prince (Aerion the Monstrous) who, being a Targaryen and all, believes himself to be a dragon (the Targaryen sigil). One of the two characters then comments that he wishes that the prince were a Fossoway (whose sigil is an apple) so that he would believe that he were, well, an apple.

Now I of course got a good laugh out of this at the time, but it's also made me think of my own armorial achievement which if you want to see for reference you look either at my avatar or below. 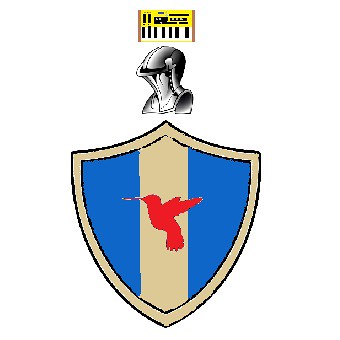 Actually this version is missing both my motto ("Truth is truth") and battle cry ("To hope's end and heart's breaking!); of course the "complete" version on my computer is also missing my supporters (hedgehogs) so c'est la vie.

Anyway back on topic, what I'm saying is since my charge is a hummingbird does that mean if I were that prince I would believe myself to be a hummingbird? Well, I suppose that's better then being an apple right? At least I don't have to worry about someone touching me and making me lose my apple juice.

Plus they are lots of cool facts about hummingbirds right? [see here]

Speaking of my armorial achievement, remember if you ever see anyone on any website with it as their avatar then odds are pretty good that it's me (especially if the username is some variation of JAG18). It's not technically official because in order to make a coat of arms official (to my knowledge) is you need to be either a member of the British realm or a direct descendant of a British subject (which I am) and then pay a few thousand pounds. So, if I ever have several thousand pounds laying around that I'm not using then I know what I'll be spending them on.