Although I did consider calling this entry "The Slender Man of Bionicle" I think Blaze from Mortal Kombat is a better fit here, but if anyone thinks they know what the character I'm looking for is then go right ahead and tell me in the comments.

So, this is a promo picture of Iconox as seen on Strakk's canister:

If you know me you know I had the closer Glatorian in the foreground (who I've dubbed "Snow N. Ice Oakenshield") as my avatar for years and considered it my calling card. In fact, I have a whole block dedicated to this guy in my blog here.

I wish I could say that I came up with this idea all by myself, but I remember seeing someone with this image as a banner back in '09, although I don't think I remember seeing anyone use it as an avatar. I don't now why I was drawn to Mr. Oakenshield, but when I become a member and was trying to think of a cool avatar I thought back to that banner I saw once and the rest is history.

Now, here are the instructions that came with Malum:

Yep, nothing out of the ordinary. Wait, what's that in the background? Let's zoom in a little. 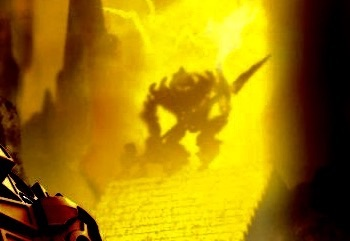 I found this today while looking for images for the Bionicle Caption Contest. Now, these instructions are from 2009 and this image was uploaded in 2016, but I've never ever seen this guy before in my entire life...If I wasn't so attached to my coat of arms, I'd considered making this guy my new avatar both as a throwback to my old avatar and because I think he also looks pretty cool.

And that is all. I hope I was the first one to point this guy out to you and that now your life is a bit better for having spotted him. Now excuse me while I try and think up a way to honor these guys probably either in moc form or in a short story where these guys fought each other in the Core War or something.