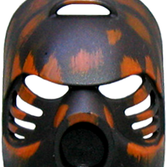 By Unreliable Narrator,
September 27, 2021 in Epics