You might remember me from when I was looking for playtesters. Well I can now say the QFTM Cube project has reached open beta 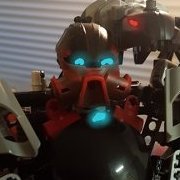 By TheVirre2000
November 3 in Bionicle Discussion