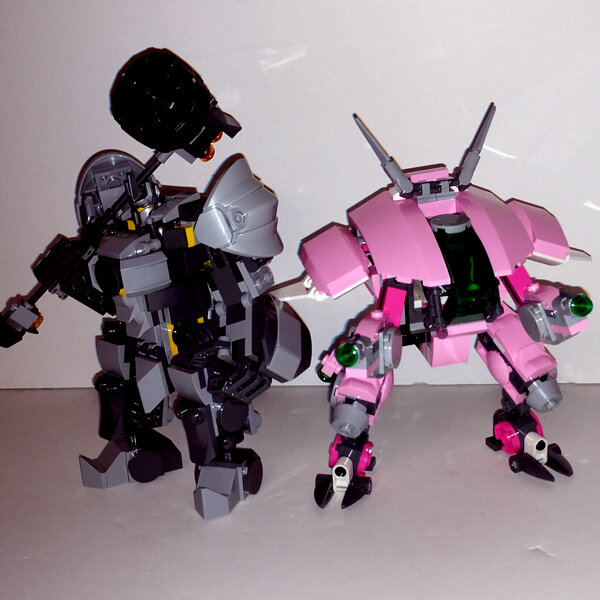 So I am not an Overwatch fan by any regards.  Never played the game, was only barely aware of the characters before the Lego sets were announced.  I'll admit that some of the figs have been mildly appealing, but most of the models didn't look that great to me.  Well, except this one; the two Mechs look awesome, and having one in pink is another major draw, because I think that'll be a first for an official Lego set.  (Why haven't we seen a Friends subtheme with pastel colored mechs and spaceships!?!)  So I picked this set up last spring, but set it aside for the chance to do a livestream of it eventually... only now livestreams are more complicated than I can easily pull off, so I'm transitioning to blog / Instagram picture reviews.  Horray.

First is Reinhardt's mech.  I am getting serious Sauron vibes from his helmet, and the bulky mech fits the same mood.  I especially like the detailing textures on the torso, and the arm shoulder pad elements are quite striking.  (Seriously, I'm thinking of a lot of fun things do with them in greater quantities; shame I'm late to the game with this set.)  I also like the clean way the fig just easily slides into the torso, with the neck piece flipping down to secure him in nicely; it's a cool design that beats the Nexo-Knight mini mechs from a few years ago.  However... posability is an issue.  The legs are okay; there's no knee joints but that's standard for Lego system mechs.  But the arms... there's a balljoint at the shoulder, but only a restricted swivel plate at the elbow and nothing for the wrist.  It limits posing options, especially when trying to adjust him with the hammer in hand.  It's a solid look, yes, and I don't know how to improve the mobility while keeping it to the same scale... but all the same, it's a bit disappointing.

D.Va's pink mech is far from a standard mech.  (I'm assuming it's true to the game, but again I never played it so that's not a big issue for me.)  It's kind of like a mix between a spaceship and a mech with a rabbit theme, complete with ears and jumping legs.  I was concerned with the legs because the feet are loosely connected via rods, which doesn't seem like a solid stand at all.  But overall, they're actually pretty sturdy and hold the model up well.  Not the most posable, but they suffice.  The arms use Mixel joints and are a bit short, but they work well enough given that they're mainly restricted by the big pink side fins.  I'll give some props for the cockpit and screen having an unconventional look, but the original instructions just have an empty space in the center where you toss the fig in without any points of connection.  No studs for the feet, no bars for the hand, just a loose fitting fig.  This didn't work for me at all, so I replaced a tile on the interior with one of the feet panels used for the mini-dolls, this giving the fig in the mech a bit of a connection.  It felt like a weak and pathetic oversight, and the fact that I was able to put together an alternative design with ease makes me wonder why the official designs did without it.  (I mean, probably from a playability stance it's too complicated to attach the fig... but gosh they should've done something instead of nothing.)  It's a different style of mech, but I think it works, and the vibrant pink color makes it stand out too.

For $39.99 USD and 455 pieces, this set is a good value, especially when it has some rare pink elements and that exclusive shoulder armor piece.  Oh, and the figs look great too; I like the bubblegum look with D.Va.  Certainly a worthwhile set, and you don't even need to be a fan of the game to appreciate it.  (I assume if you are a fan then you probably appreciate it even more.)  I'm mostly disappointed in myself for not building this sooner.  I also have the unopened Overwatch Wrecking Ball set which I'm looking forward to finally building; will probably post a short review for it too.