For the uninitiated, The Star Wars Epic Duels Game is a board game released in 2002 to promote "Attack of the Clones"; it did not sell well in it's initial run, but went on to gain a cult following. It also happens to be my favorite board game and is what got me into the hobby in the first place; I'm even a mod over at the Epic Duels Wiki (the number one place to discuss Epic Duels). Naturally, over the years I've thought about combining two of my great loves together, but actual decks never materialized. 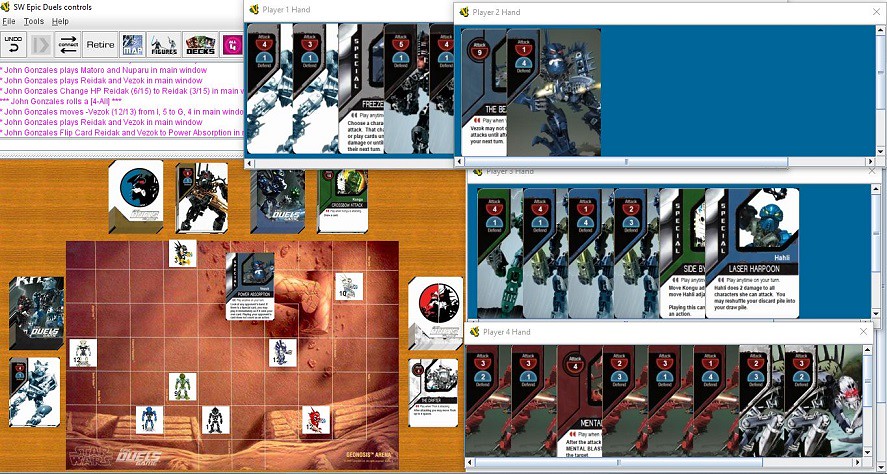 I've made six decks from the '06 story year (three for the Toa Inika and the three for the Piraka) and have play tested them to the point where I think they're all acceptable enough. Obviously, Bionicle could spawn dozens of decks, but I chose to focus on the '06 storyline for several reasons;

1) The "Bionicle Heroes" and "Piraka Attack" games gave me plenty of material to mine when designing this deck (e.g. Matoro is a sniper, Jaller attacks rapidly)

3) Although I know no one will ever play this live (as opposed to in Vassal like I did above), the 2006 minifigures would be perfect for this game.

4) VNOG and BH both gave me lots of great images to work with when making the decks.

Thoughts on the Decks (Mediafire link):

This pairing and the theme of this deck (a fun, run-and-gun duo) came very easily, which is why it was the first one to get made. Aside from trying to get Hakann's offensive mix right this deck stayed almost the same from beginning to end. This deck is very typical bounty hunter deck and is probably my favorite of the Piraka even if it's basically just a collection of cards inspired by the Piraka's powers.

He's got a energy/laser crossbow and she's got a mask that finds things so naturally I decided to base this on the Han and Chewie from the original game and it worked out really well (no doubt because it's such a great design to begin with). Honestly, all I needed to do while playtesting was tone this deck down a bit because for a while it seemed like it was too good! Maybe my favorite of the six.

The first deck with a melee major I created; I recycled the theme of a "melee Emperor" that I used in my Dryden Vos deck for this deck with the added twist that Avak uses a card from Mike Maloney's Aayla Secura deck. Zaktan forces discards and Avak punishes players for it; Avak can sorted of hold his own by using his FORCE LIFT inspired card, but the two really need each other. Ultimately, the deck works just not super well.

This one required going back to the drawing board once or twice, but the idea of basing Jaller off of Darth Maul from the originally game was always there. This deck ended up as a "ranged Maul" flanked by a powerful ranged minor (who honestly stayed the same from start to finish). Probably the strongest of the set.

The deck that went through the most revisions. Basing the deck around Matoro's sniper persona in "Bionicle Heroes" was a no brainer, but getting it to work wasn't easy. I used DT's 4-Lom and Zuckuss deck as a kind of base, but ultimately this deck just turned out OK.

The deck I had no idea what to do with. At first, I thought back to Roman's old Urgak and Grishnak deck since the theme of that deck ("These two guys really want to hurt each") fits Reidak and Vezok (or any two Piraka honestly) well enough. The end result was a strange amalgam of Grishnak mixed with cards based on the Piraka's powers (cards borrowed from Mike Maloney's Quinlan Vos deck and Starscream); the only deck I'm not entirely sure about.

Obviously, there's plenty of room for expansion here; not just more characters from '06 (Toa Nuva, the titans, Matoran Resistance team, Nektann), but from the rest of the story. I doubt I'll make many more though; this was fun to do just to say that I've done it and so that Bionicle Epic Duels actually exists, but I'd rather put my Epic Duels deck making energy into making decks that will get some attention in the larger ED community. But hey, I hope the decks at least look cool and that some of you guys will get the references in the card names.